From Idle Champions of the Forgotten Realms Wiki
Jump to: navigation, search

The various Gear in Idle Champions of the Forgotten Realms.

Gear can be collected by opening Chests. It is automatically equipped to the corresponding champion's slot to make them stronger. Four rarities of gear exist for each slot (Common, Uncommon, Rare, and Epic), and each can be more effective by being either Shiny or Gold (epic only).

The following is a list of Gold and Shiny items that have been available through promotions like Recruit-a-Friend and given with chest purchases or DLC.

Gold Epics sold during events may also be bought from the shop for a limited time following choosing them from a time gate, or as a daily deal provided you have not already bought it.

As of October 28, 2019, the new Wild Offer system was introduced. Wild Offers are customized package deals that offer limited-time Golden Epics, Skins, and Familiars that are no longer available through normal means. Each Wild Offer is unique, generated based on your specific progress, and new offers will appear every few days.

Buying a Golden Epic for a shiny gear item will refund a Potion of Polish.

Complete the "Azaka's Procession - Part 2" variant in the "Tomb of Annihilation" campaign.

Diath - Midsummer (Has been replaced with Xander)[edit | edit source]

Complete the "A Saurial's Resolve" variant in the "Tomb of Annihilation" campaign.

Complete the "Overdue Rendezvous" variant in the "A Grand Tour of the Sword Coast" campaign.

Complete the "The Gargoyle" variant in the Waterdeep: Dragon Heist campaign. 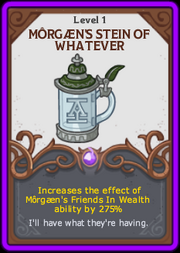 Item level is shown at the top of the equipment card.

Each piece of gear has a level, which applies a multiplier to the base effect of the gear. When a piece of gear is unlocked but the slot is already filled, whether by that same piece of gear or by another piece, the level of the gear is increased and the highest rarity item is equipped. Gear can also be leveled up by using a Blacksmith Contract. [More information required]

The number of levels that gear is increased by when a duplicate is found depends on the rarity of the duplicate.